“MALE AND FEMALE HE CREATED THEM ”- TOWARDS A PATH OF DIALOGUE ON THE QUESTION OF GENDER THEORY IN EDUCATION The Vatican’s Congregation for Catholic Education has issued a document on the question of gender theory, which, while containing no new doctrinal elements or developments, seeks to present the Catholic Church’s position on the question … END_OF_DOCUMENT_TOKEN_TO_BE_REPLACED 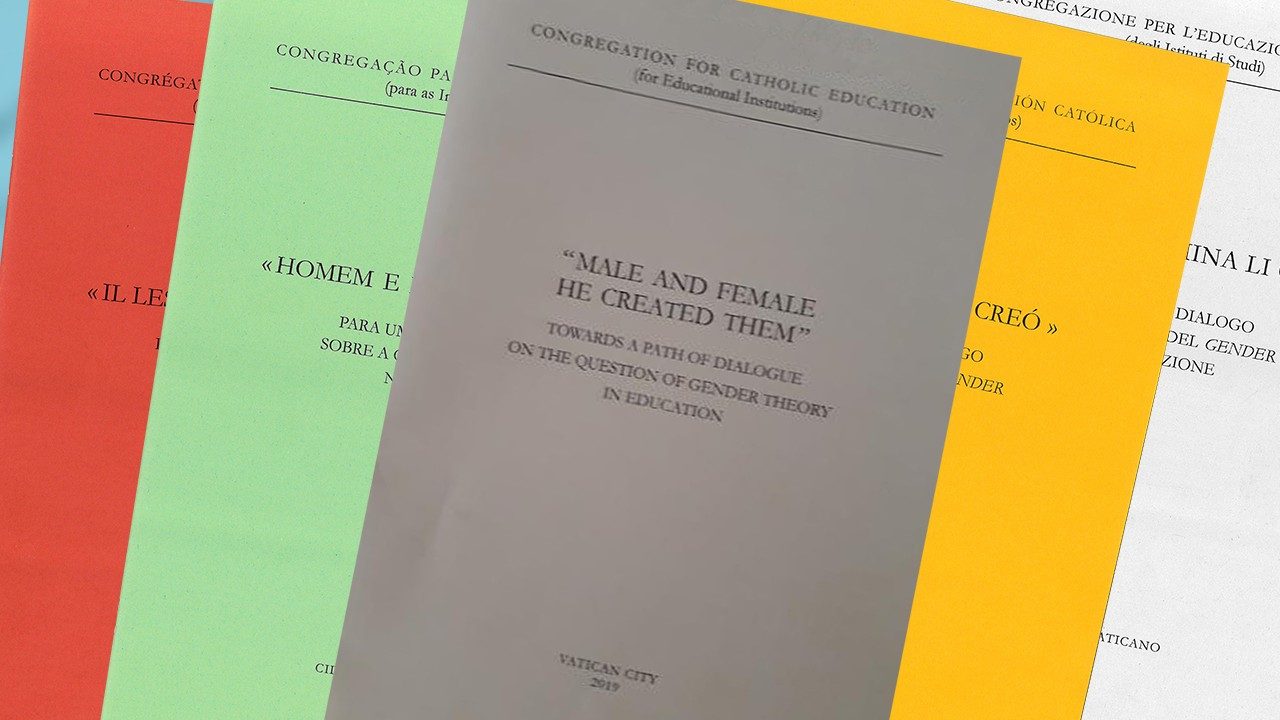 The Vatican’s Congregation for Catholic Education has issued a document on the question of gender theory, which, while containing no new doctrinal elements or developments, seeks to present the Catholic Church’s position on the question in a non-polemical manner and expresses the need to dialogue on the subject.

[It notes the new anthropological theories] “were based on a reading of sexual differentiation that was strictly sociological, relying on a strong emphasis on the freedom of the individual,”

The text explains that “gender theory” expresses an ideology that “denies the difference and reciprocity in nature of a man and a woman and envisages a society without sexual differences, thereby eliminating the anthropological basis of the family.”

“When such [ideologically based] studies were applied to human sexuality, they often did so with a view to demonstrating that sexuality identity was more a social construct than a given natural or biological fact.”

The text continues: “The duality in male-female couples is furthermore seen [by the new gender theory ideology] as conflicting with the idea of ‘polyamory,’ that is relationships involving more than two individuals. Because of this, it is claimed that the duration of relationships, as well as their binding nature, should be flexible, depending on the shifting desires of the individuals concerned. Naturally, this has consequences for the sharing of the responsibilities and obligations inherent in maternity and paternity. This new range of relationships become ‘kinship,’” which are “based upon desire or affection, often marked by a limited time span that is determined, ethically flexible, or even (sometimes by explicit mutual consent) without any hope of long-term meaning.”

The document then goes on to outline the Christian anthropology, which, it says, “has its roots in the narrative of human origins that appears in the book of Genesis, where we read that ‘God created man in his own image…male and female he created them.’”

The congregation’s document argues that “there is a need to reaffirm the metaphysical roots of sexual difference, as an anthropological refutation of attempts to negate the male-female duality of human nature, from which the family is generated.”

Drawing on the teaching of Benedict XVI and Francis, it says, “The denial of this duality not only erases the vision of human beings as the fruit of an act of creation but creates the idea of the human person as a sort of abstraction who chooses for himself what his nature is to be.”

It continues: “Man and woman in their created state as complementary versions of what it means to be human are disputed. But if there is no pre-ordained duality of man and woman in creation, then neither is the family any longer a reality established by creation. Likewise, the child has lost the place he had occupied hitherto and the dignity pertaining to him.”

The document concludes by saying that “Catholic educators are called to go beyond all ideological reductionism or homologizing relativism by remaining faithful to their own gospel-based identity, in order to transform positively the challenges of their times into opportunities by following the path of listening, reasoning and proposing the Christian vision, while giving witness by their very presence, and by the consistency of their words and deeds.”

Male and Female He Created Them